The Cumbia Cave is down a bumpy road in Nuevo León, Mexico. It is located in an area called Las Adjuntas, which is where two rivers converge in a beautiful lush canyon famous for it's canyoneering adventure called Matacanes. The Cumbia Cave is on the way to the already popular area El Salto also known for it's amazing tufa climbing.


Nuevo León is loaded with climbing potential. With only a few local climbers bolting and a smaller number of US climbers then pre-drug war days it is overwhelming how much development of amazing climbing there is to be done here now. Another area which has huge potential is called El Diente which is ten minutes down a road from the city of Monterrey. It has everything for a great sport climbing area four stalactite caves, a 1,000 foot El Diente (the tooth), and an amazing two pitch tufa wall two minutes off the road pictured below. It is all on National Park land but unfortunately a mining company now owns the access road to this amazing gem.

We found the Cumbia Cave while driving to another cave full of amazing tufas in the Chipitin waterfall. We decided the drive and hike was a bit to much for that cave though I think somebody could bolt a long adventure route there and it would be amazing. We started bolting the Cumbia Cave last spring and there are currently 15 routes from 11a to 13a.

With the abundance of holds and tufas at the Cumbia Cave we will likely be bolting many more routes. Just looking around a little last weekend I spotted another cave across the canyon. We also bolted an area called the La Cueva del Oso two years ago it is a little more remote and has the white dust of north facing limestone caves.

If anyone is interested in climbing or bolting in the Cumbia Cave this winter feel free to contact me for beta on getting there. There is some beta here:
http://www.mountainproject.com/v/cueva-de-cumbia/108010004

Donkeys!
The river at the camping for the Cumbia Cave.

Posted by Mark Grundon at 7:40 AM No comments:

Here are some photos from our climb on Devotion in El Potrero Chico. I had two great days climbing with Mike from Tennessee.  His partner wasn't able to make it at the last minute so he hired me as a guide. We climbed Yankee Clipper and then Mike suggested Devotion which had been on my list for a long time.  5.11d R doesn't always attract you to a route though.

I had climbed other routes with similar ratings in Potrero and found them not runout on the crux pitches at all.  With a few cams along this route seemed about the same.  We added a bolt on a pitch above the ledge as requested by Magic Ed one of the first ascensionists.  The route was definitely an adventure and overgrowing as it sees little traffic.  I think if more people start climbing it, it could clean up and be a classic line one day. 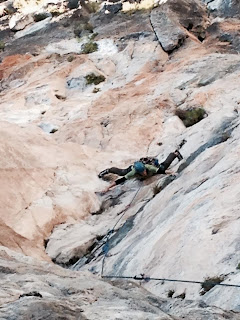 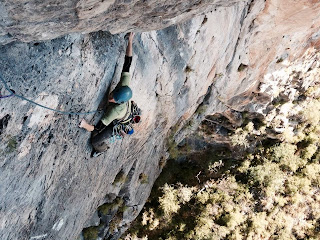 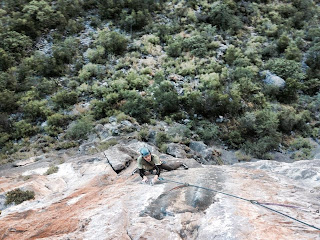 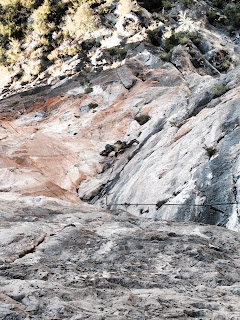 Posted by Mark Grundon at 4:34 PM No comments:

Dreams of Stalactites and Sleep 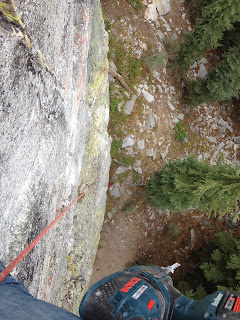 Fatherhood has arrived.  It was an overwhelming experience after two nights of no sleep waiting for Isabella to start coming out on her own.  Standing in the operating room cutting the cord that connected my daughter to my wife, looking back and seeing the surgeons surrounding my wife as they pull the large bloody placenta out of her abdomen.  Perhaps one of the more intense moments in my life.

Isabella Adeline Grundon was born by Norma Torres Grundon on September 26th at 9:17 am. It was a long road to that moment.  More for Norma then me I'm sure.  She was ten days late and stubborn to come out.  Without going into too many medical details we entered the hospital basically at night on the 24th and after lots of pushing, waiting, and complications received little Isabella via C-Section on that snowy September morning in Mammoth Lakes, California.
So the baby is born and all is back to normal.  I go back to work the day we get out of the hospital and I am excited to be guiding again.  The next day the government shuts down and I am out of work again.  So here we are blogging on the internet getting excited for a winter season in Mexico of Fatherhood and Stalactite.

Posted by Mark Grundon at 8:52 PM No comments: